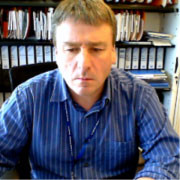 His research interests include the following:
Chromosome segregation in Streptomyces. cell division in streptomycetes is fundamentally different from other bacteria as it is inessential for growth. Despite progress on elucidating the regulatory mechanisms governing the onset of differentiation in streptomycetes, little is known about the mechanism of chromosome segregation. We are using molecular and microscopic tools to investigate this in Streptomyces. Using time lapse microscopy we have visualised trafficking of key cell division proteins and DNA replisomesduring growth and development.

Oxytetracycline productivity in Streptomyces rimosus. In the commercial production of antibiotics, extensive strain improvement programs have been carried out, where the original isolate of an antibiotic-producing organism has been improved sequentially to deliver a titre of product that is commercially-viable. This "black box" methodology was carried out for Streptomyces rimosus, which makes the antibiotic oxytetracycline. To identify the basis of strain improvement we have sequenced the genomes of four S. rimosus strains and are attempting to understand the genetic changes and biochemical bottlenecks by which carbon flux is directed away from primary metabolism towards natural product biosynthesis.

Exploitaion of Bacteriophages. In collaboration Fixed Phage Ltd. we are exploiting bacterial viruses for the treatment of plant and animal diseases

Some of these cookies are essential, while others help us improve your experience by providing insights into how the site is being used.